So there you are standing, shoeless, in a line impatiently waiting to send your belongings through the baggage scanner when you realize that you yourself are required to be scanned and examined as well. How do you feel about that?

Most people would be uncomfortable with the thought of choosing to have radiation infiltrated throughout their body, while others would happily accept the scanning process in comparison to being manhandled by a security guard. Surprisingly, the airport scanning procedure lacks viable strength to do much damage, if any, to a human body. Read on to discover why you shouldnt be so skeptical of the Airport Body Scanners:

There are two main types of scanners used by airports worldwide. Both scanners are used in order to detect unacceptable tools and liquids, potential weapons and dangerous objects as well as other items inappropriate to carry on a plane. They can also identify hidden objects underneath clothing and even items that have been taped onto the surface of the skin. 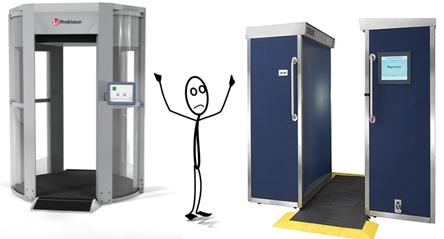 A Quick Overview of Radiation

-Energy in the form of waves, rays and energetic particles that travel through space.

2.  In what ways are we exposed to Radiation?

-Everyone receives radiation in low doses from space, air, the sun and even rocks. There are small amounts of radioactive materials in the food we eat, the water we drink and from household appliances (such as microwaves and TV's).