No one has found the worth of the ruby of the heart; its value cannot be estimated. 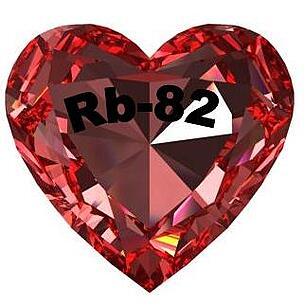 Rubidium-82 chloride (Rb-82) is a metallic element which has a number of radioactive isotopes. It is used mostly for myocardial perfusion imaging; which shows the functionality of the heart muscle. It also detects the perfusion defects due to myocardial infarction. This element does not exist naturally; it is actually formed by the decay of a different element, SR-82 (Strontium-82). Rubidium is used as an agent in conjunction with a PET scanner, in order to identify where the heart is receiving poor blood flow. It is used for the diagnoses and management of patients with known or suspected cardiovascular diseases. Such as, high blood pressure, coronary heart disease, heart failure and stroke. It also detects brain tumors.

Rb-82 is first injected into a vein and within the first minute heart muscle activity can be seen. It has a half-life of 1.27 minutes, so the tracer does not remain in the body very long. This small dosage of radioactivity allows images to be taken of the heart. There are no known side effects associated with the intravenous administration of Rb-82.

A few things to note about Rubidium-82:

The purpose of the study is due to the fact that cardiovascular disease is one of the leading causes of death in Canada. They hope to adopt the use of the Rb-82 injection element because it is believed that it has superior accuracy compared to what they are using now, which is Tc-99m. Compared to the Tc-99m, the Rb-82's radiation dose is 5-20 times less.

The plan is to use Rb-82 for 2 years at 10 different Canadian clinic locations and gather the results in order to prove that it is a necessary addition in diagnosing cardiovascular disease.

The impact they hope to achieve is that the standard of care for the many Canadians who have heart disease will improve. Also, by using Rb-82, it will decrease the high demand for Tc-99m and will increase the available supply to be used for other procedures.

So, in conclusion, here are some key characteristics to remember about Rb-82:

Rb-82 is a short lived tracer that is used to show which regions of the heart muscle are weak. It helps locate brain tumors, aids in evaluating a heart attack and detects cardiovascular diseases. It contains a very low dosage of radiation and is safe to be injected into all ages.