PACS-Which side are you on?

If you work in the medical industry, then you have probably heard, at some point, the acronym PACS. But perhaps you aren't sure what it stands for, what it does and why its used. Learn why some PACS praisers claim that it has revolutionized the field of radiology, while others find it not very useful.

PACS stands for Picture Archiving and Communications Systems. It is a computer-generated and filmless information system which is used to obtain, sort, transport, store and display medical images. It is becoming an increasingly essential part of a radiologists daily workflow. In comparison to the former times of image collection with the use of analog film, the PACS system doesnt lose reports or film, and doesnt waste your time with olden day filing processes. Instead, PACS saves you time and money because it allows you to view images from different locations (due to its remote access capabilities) and it helps you organize the patients images, which in turn allows for easier retrieval because you arent manually trying to find reports.

DICOM is the universal format for PACS image storage and transfer.  A PACS system is made up of four key components:

These components combined creates PACS, a hardware and software dedicated to short and long term access to patient images, reports and records.  Most of PACS consumers are large hospital systems. However, some smaller clinics have also incorporated PACS into their workflow.

One of the biggest questions in regards to PACS is whether or not it actually can provide substantial evidence that it in fact saves users money, time and other resources. Studies have been done in order to support the features of PACS as successful and rewarding. There have also been studies that conclude that perhaps PACS is not as resourceful and successful as been noted.

One specific factor that makes it difficult to collect valid data for direct costs is that each facility that uses PACS varies in size and in the number of examinations performed on a daily basis. Its impossible to compare data when these numbers are so wide-spread. Differing numbers in regards to the costs of archive space, material and personnel also aids in not providing information that can be compared collectively. Some people do not realize that PACS requires specifically trained operators for its' systems. But how do you account for how much time is spent by each medical personnel on this image management system? Overall, studies concluded that space and material only added up to a small portion of the total costs, but the personnel costs ranked higher. 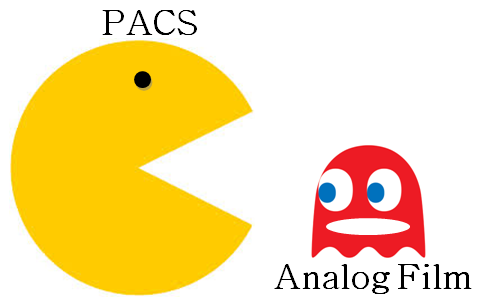 Indirect Costs = the accessibility and time savor of retrieving files and images in PACS compared to manually sifting through files to find a patients records using analog film.

Specific indirect costs which prove to lack clear demonstration of overall cost would include the length of time a patient stays at a hospital, examinations that have been processed more than once and the decrease in efficiency of physician practices.

Some research has proven that if a hospital system has PACS, than a patients stay is usually shorter because their images are able to be reviewed and interpreted quicker and there are no delays in finding the information they need because its all in the system. It was reported that those who needed to locate the files manually ended up causing delays and sometimes would even do duplicate examinations, so it caused the patients hospital stay to be longer.

Overall, those who did not seem convinced that PACS was successful and worthwhile argued that the system could be unreliable and also reduced diagnostic capability. Those in favor of PACS claimed that it ensured that images could not be lost or misplaced and that it eliminated countless trips to the file room to recover patient records and images.

Whats your opinion of PACS? Share your thoughts in the comments section below!